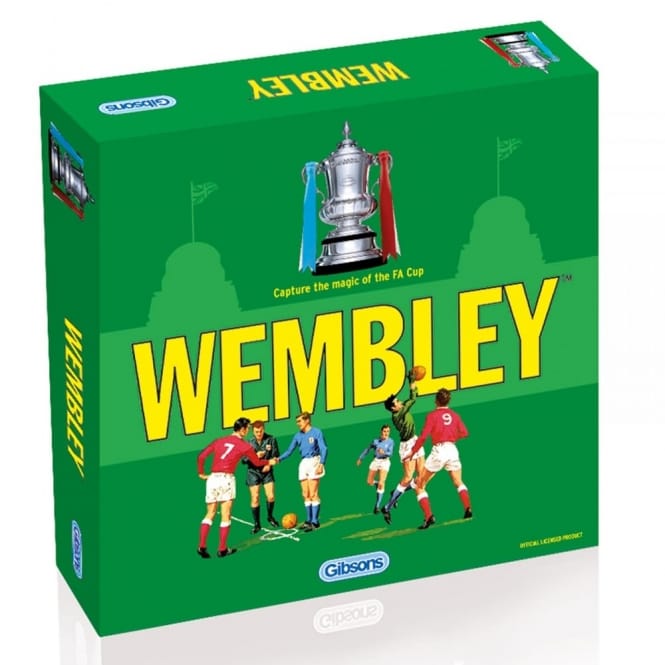 Showing 3 of our total 4 reviews, with an average rating of 5 stars. Read all 4 reviews for Wembley Family Board Game.
Write a review ›
Review Summary - 5 out of 5 based on 3 ratings.
Wembley board game
19 Feb 2022 | Lynn

Great game for footie mad family of all ages. Easy to order, delivered promptly, great service overall & would definitely use this company again.

Ordered this for our Grandsons 11th Birthday I had this game and my son had this game at similar ages.it arrived on time as stated and was great value for money .wouldn’t hesitate to order from the company again

I bought the Wembley Family Board Game as a present for my nephew who is football mad and loves board games- seems appropriate! It looks very good quality, good sturdy box and I think he will love playing it with his football mad family.

Showing 3 of our total 4 reviews, with an average rating of 5 stars. Read all 4 reviews for Wembley Family Board Game.
Write a review ›

by Gibsons
Ref: 209541
4 Customer Reviews
Loading...
Want it delivered, Wednesday 1st June? Order in and choose Next Day Delivery at checkout. Or Free Standard Delivery on orders over £40.
5+ In Stock Now In Stock Out of Stock |

Capture the magic of the FA Cup, Gibsons have relaunched their classic game.

Does your team have what it takes to walk the Road to Wembley?

Inspired by the magic of the 1980-81 FA Cup, Wembley takes you back to the 100th anniversary of the world’s oldest football competition, when Tottenham Hotspur defeated Manchester City in the first Wembley replay and Ricky Villa scored that unforgettable goal. Wembley celebrates the good old days, capturing the atmosphere and excitement of the game before the glamour of the Premiership, when all that really mattered was the game and the glory.

Game play starts at the crucial third round, when only 32 teams are left in the competition. Once the team cards have been drawn, it’s down to you to manage your teams to the top. Will you invest your hard earned cash in star players? Or hope the odds are in your favour when you roll the cleverly weighted dice?

As the game progresses, players must turn the Draw Cards to reveal which teams are going head to head. The dice are then rolled to find out who will claim the gate receipts and stay in the competition. When there are only two teams left, it’s time to take your places at Wembley for the final match!

When it comes to the fight for the FA Cup, 90 minutes of fierce competition will leave only one team standing….

Wembley was built for the British Empire Exhibition of 1924 and was initially known as the Empire Stadium. Designed by Sir John Simpson and Maxwell Ayrton it was built in 300 days and completed only four days before the famous 1923 ‘White Horse’ FA Cup Final between Bolton Wanderers and West Ham United. Once described by Pelé as ‘the cathedral of football’ Wembley along with its iconic twin towers was demolished in 2003 and replaced by the new Wembley Stadium.