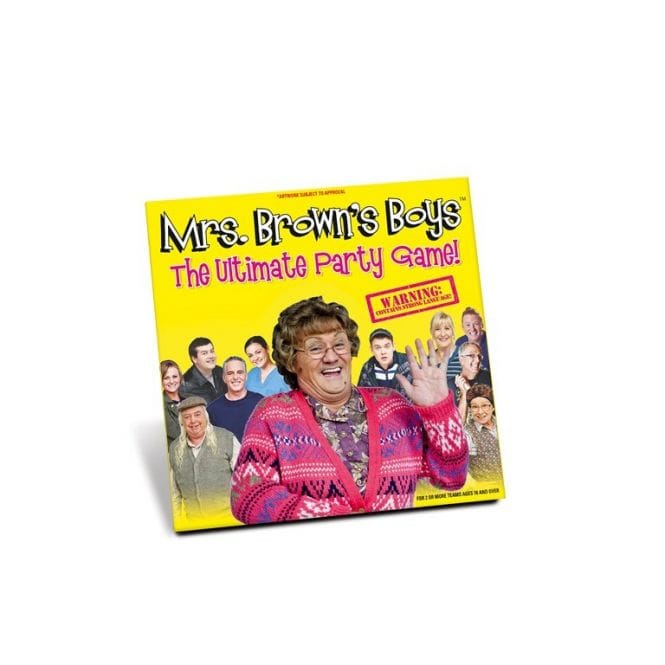 Be the first to review Mrs Browns Boys Party Game. Write a review

by University Games
Ref: 217826
Loading...
Want it delivered, Wednesday 6th July? Order in and choose Next Day Delivery at checkout. Or Free Standard Delivery on orders over £40.
5+ In Stock Now In Stock Out of Stock   |

This cracking board game can be played by up to four players.  Each player moves around the board by throwing the die and undertaking the challenges on the square on which they land, of which there are four categories; Draw, Act, Talk, or ‘What am I?’. The player then takes a card from the Performing Cards pile and draws, acts, or talks about the word on that card. The aim is for the other players to guess correctly before the random timer, which lasts between 20 – 45 seconds, goes off and Mrs. Brown speaks! If the player lands on the ‘What am I?’ square then a card from the ‘What am I?’ pile is put on the head of the player and with other players answering only yes or no they have to guess what they are before Mrs. Brown speaks. If the tasks are completed before Mrs. Brown speaks, the player can throw the die again and move around the board.  If they fail then a ‘Giggle’ from Mrs. Brown allows the player to stay put, ‘That’s nice’ or ‘Would you like a cup of tea love’ means the player can progress one square but any other comments from Mrs. Brown result in retreating two squares! This hilarious game is perfect for after-dinner entertaining or just for playing with friends and fans of the show. It is certainly guaranteed to have you laughing all the way to ‘Party Night’!