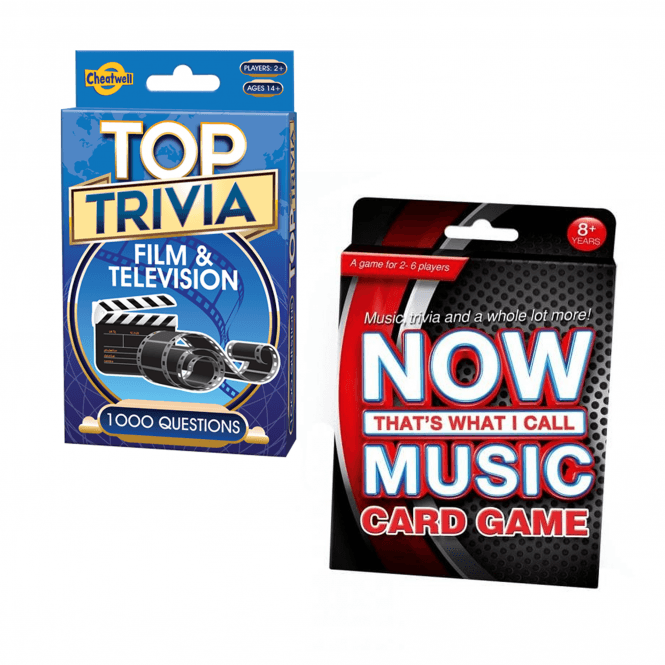 Be the first to review Film, Television and Music Trivia Game Bundle. Write a review

by Cheatwell Games
Ref: 220503
Loading...
Want it delivered, Wednesday 6th July? Order in and choose Next Day Delivery at checkout. Or Free Standard Delivery on orders over £40.
5+ In Stock Now In Stock Out of Stock   |

Gogglebox or Multiplex, Film Buff or Couch Potato, you think you know your trivia?! This card pack comes jammed with fun-filled facts from the world of ‘Telly’ and the Silver Screen. From Adverts to X-Factor, Bond to The Wizard of Oz, it’s an instant trivia challenge for all film and TV fans - just add the contestants!
Suits Ages 14+    2+ Players

Now that's what I call music

Do you love music? Are you a fan of the Now music series? Now That’s What I Call Music is one of the most successful compilation album series of all time and music fans can now put their musical knowledge to the test with this fun-packed, travel-size Card Game.  From New Romantics and Britpop to House and Rap, the chart-topping NOW music series has become the soundtrack to our lives so relive the last few decades of great music in this fast-moving, trivia Card Game.  There are questions from the 80’s, 90’s, 21st Century and Oldies as well as ‘Complete the Title’ and song titles to be guess from only the ‘Initials’. The Now That’s What I Call Music Card Game promises hours of fun and entertainment for the whole family and makes a perfect on-the-go or holiday game. The aim of the game is to answer the question and win the card.  Each card carries a letter N, O, W or ! players must collect the four cards to spell the word NOW! to win the game.  This quick play, travel size, fantastic music trivia card game is ideal for 2 – 6 players and suitable for ages 8 years and over.